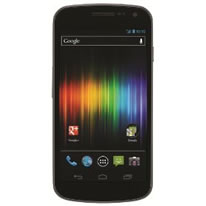 It looks like a fancy mobile dessert like an Ice Cream Sandwich 4G smartphone just got a little more affordable now that the Samsung Galaxy Nexus 4G just received a retail price drop down to a start price of $99.99 at select Verizon authorized retailers.  The Galaxy Nexus is the first smartphone device to offer the Android 4.0 Ice Cream Sandwich operating system, and for many consumers, it was worth waiting for.  The highly anticipated smartphone had a few false starts and was finally released on December 17th.

The phone’s price tag initially was rather hefty at $299 (which, incidentally is still Verizon’s price), and has since seen a few reductions before reaching its currently deal maker price tag of only $99.99 for new customers.  As the first ICS powered smartphone, the public finally got a look at the updates and enhancements that come with this latest Android platform.  Learn more about the Ice Cream Sandwich OS on the Galaxy Nexus in our detailed Samsung Galaxy Nexus 4G review.

Along with introducing a new OS to the world, the Galaxy Nexus also delivers a poweful 1.2 GHz dual core processor, a stunning 4.65″ Super AMOLED multi-touch screen, 32 GB of internal memory and a full 1 GB of RAM, dual cameras, Android Beam, the deepest Google integration and preloaded apps, next generation Bluetooth connectivity, and so much more!  It has received a solid 4 out of 5 stars rating from Amazon users, and has delivered a stellar performance on all levels.  Read more in our Galaxy Nexus Review or buy the Galaxy Nexus starting at just $99.99!