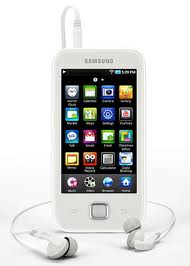 In a bid to expand its Galaxy Brand, Samsung has unveiled details about the Galaxy Player, an Android-based Wi-Fi mobile device that allows consumers to do everything but make a call.

After month of talking about it, Samsung officially announced the Galaxy player for the first time at the Barcelona Mobile Congress last month, and revealed final details about the player at Wednesday’s 2011 product preview at the Samsung Experience showroom in New York, reports Cnet. The new device looks like a 4 or 5 inch version of the Galaxy Tab model and runs on Android 2.2 Froyo that will be upgradeable to the 2.3 Android Gingerbread. It has a 1 GHz processor and front and back facing cameras. The Galaxy player also comes with MicroSD expansion ports, support for Adobe 10.1 flash, Audio support for MP3, WMA, AAC, Ogg, and Flac files, and DivX, Xvid and video support for WMV, MPEG4, and H.264 files.  It also has Stereo speakers, with Virtual 5.1 surround sound and Samsung’s SoundAlive post-processing technology, adds Cnet.

The Galaxy player, which has very similar characteristics as the iPod Touch, offers a “fun way to enjoy games, music, videos and social media,” and is intended to be used as a media consumption device that can fit into any pocket, said president of Samsung Electronics America, Tim Baxter at the launch on Wednesday, according to PCworld.

The new addition to the Samsung Galaxy Brand comes preloaded with Skype and supports m-VoIP calls and video calls using Qik, says ZDnet. The new device also makes for easy social networking thanks to downloadable apps such as Facebook, Twitter and many more.

“Our Galaxy Family – including Galaxy S mobile phones and Galaxy Tab – has been a success because we give people what they truly wish for – access to thousands of Android Apps coupled with Samsung’s sleek design,” explained Baxter in a press release, adding, “Our new Galaxy Players deliver that same experience in two terrific, ultra-portable form factors – without incurring fees for a monthly data plan.”