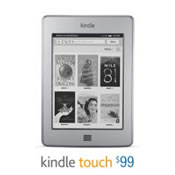 Amazon may not be new to the world of eReaders, however, the company is sailing uncharted waters when it comes to touch devices. The question has been asked of the online retail giant why did it take them so long to release a touch screen device. Amazon claims they needed time to get the technology right. That being said, it will ultimately be left up to you if they did strike gold with the Kindle Touch, but until you have a decision, continue reading for our thoughts and impressions on the device’s performance, and where to buy the Kindle Touch for the best possible price.

The Kindle Touch design is one that is different from that of what we have seen on previous Kindle devices. Although the screen size remains the same size as the previous Kindle models, the device is slimmed down thanks to the lack of a physical keyboard. The dimensions read 6.8” x 4.7” with a thickness of just 0.40 inches. The weight of the entire device comes in at just 7.5 grams which should make it an ease on the hands. Overall, he design is great and we are pleased with the slimness as it makes extended reading periods a joy.

As mentioned before, the strong point of the Kindle Touch is the 6-inch touch screen which supports multi touch and has an improved refresh time. Overall, the resolution is 600 x 800 with 167ppi and 16 levels of grayscale.

Moving along, we find 4GB of internal storage though Amazon claims that the storage available for users is about 3GB which translates into 3,000 books. Unfortunately, this Kindle model does not support microSD cards so you are stuck with the internal storage. To lighten the blow, Amazon has given free cloud storage for all content purchased on Amazon, which provides incentive to not only purchase your Kindle Touch from Amazon, but to also buy your interactive content from them as well.

The only ports on the device are a microUSB connector for syncing as well as a 3.5mm headphone jack. Speaking of headphones jack, there are rear mounted speakers for your listening pleasure. Supported formats include TXT, PDF, Kindle (AZW), AAX, MP3, HTML, DOC, DOCX, JPEG, GIF, BMP and MOBI among others.

Last but not least, the 3G version will operate free on the AT&T network as well as have access to all of AT&T’s thousands of hotspot locations worldwide.

The big feature on this device is the touchscreen and as such we were anxious to test it out as we have seen less than perfect implementations of touch screen on other tablets that shall go nameless. Kindle is boasting multi-touch and from our experience, the wait was worth it. Of course, one should not expect tablet or phone like performance from the Kindle’s touch screen, but it is an improvement over what we have seen.

The refresh rates have been improved and overall the screen is works great under bright sunlight as well as indoor lighting. Unfortunately, there is no backlight so you are limited in your use of the screen under low lighting conditions unless you have an external light.

The Kindle Touch carries a web browser and we quickly became thankful for the touch screen when it came time to browse web pages. Of course, the browser is very basic and you will do yourself a favor by using it to read news and little else. That being said, the browser is on the slower end but still not slow enough to warrant excessive complaining.

The non-removable battery is claimed to last an astounding 2 months with Wi-Fi off. With Wi-Fi on, Amazon claims that number drops to 6 weeks. We were not able to garner such exceptional numbers during our tests but with Wi-Fi on we managed well over two weeks with plenty of charge left. We were not about to do a complete battery run down but we’re pegging the battery life closer to a month with Wi-Fi off with average daily reading amounting to less than 2 hours. Suffice to say, you can easily carry this device on a vacation without worrying about charging it.

The 3G version allows you to download books and other content from the Kindle store without signing a monthly contract. This luxury does come at an additional price, but we would suggest going with the 3G version for avid readers as the service is free once you buy the device.

Our only reservation with the Kindle Touch is that at the starting price of $99, the device is ad supported. For those who are heavy readers, this may become an issue. However, for $50 more those ads can be removed. Personally we would much rather pay the $50 premium which would also allow access to Amazon’s cloud storage on the go.   We have included information on where to buy Kindle Touch for the lowest price with the best customer service.