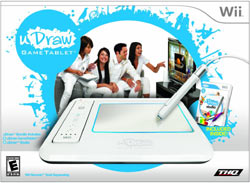 The Nintendo uDraw Studio add on is a savvy new attachment for the Wii that adds a new dimension to the video game scene by integrating art, design, creativity, and a popular board game into the beloved video gaming platform. The uDraw Studio is comprised of a wireless sketch tablet that includes a tethered stylus, allowing players to draw, sketch, paint, color, and more using the motion-sensing Wii Remote controller, which is placed directly into the tablet.

The uDraw tablet tracks your drawing movements, while the interactive stylus pen allows you to intuitively connect with your TV and your uDraw games utilizing pressure and tilt-sensitive technology.  It comes bundled with the uDraw Studio Game, that is a creative outlet for players of all ages.  You can draw, paint, color, sketch, and even save and share your work.

The uDraw game that we are extra excited about is the Wii Pictionary Game.  It retains the general concept of the Pictionary board game, with some additional features and twists that only the Wii could deliver with such astonishing performance.  Having personally played the uDraw Pictionary game, I can tell you that while it takes a little bit of getting used to, we could hardly put it down after playing for hours into the wee hours of the night.  The game is innovative, entertaining, and provided us with an exhilarating family gaming experience that we cannot wait to recreate.

Nintendo is currently in the process of developing some exciting 2011 game releases for the uDraw Tablet, and we can’t wait to see what they are!!  The uDraw Studio Game and Tablet Bundle is priced at $68.99.   The uDraw Pictionary Game is sold seperately.