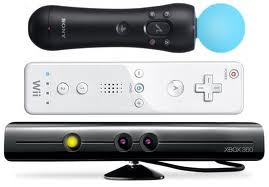 As the critical component of exercise and fitness for children becomes a focus in medical and scientific studies, new data has been released that highlights the value of motion gaming in trying to get kids to be more active on a daily basis.  Its not secret that kids are already highly interested and engaged in the video game industry, so why not use that interest to get them up and moving?  While motion gaming doesn’t quite get them outdoors to play, it does at least get them involved in interactive gaming that provides a movement element that can be so much fun, they are oblivious to the exercise value of the game.

Playing video games can actually cause your brain to grow!!  Recent studies have linked brain development and over health with play and exploration, which directly promotes creative problem solving, improve language skills, and also improve memory.  Creative play and exploration have been shown to trigger the release of BDNF, which is essential for the development and growth of brain cells.

In addition, children can experience improved focus, better balance, and less anxiety, producing children who have a higher sense of well being, confidence, and who feel more calm.  We all know how strong the relationship between video gaming and children is, and what better way to engage children in something that is beneficial and healthy for them than by taking advantage of one of their preferred modes of entertainment.

Motion gaming has revolutionized video game play, which is motion based, interactive gaming that engages the player in immersive gameplay through motion sensor technology.  Both the Nintendo Wii and the popular PlayStation 3 offer motion gaming controllers, while the Microsoft Xbox 360 Kinect add-on offers controller free motion gaming.   All of these systems require interactive movement and provide extensive physical  activity and exercise, in fact, there is a series of enjoyable fitness games developed for each of the mainstream motion gaming consoles.