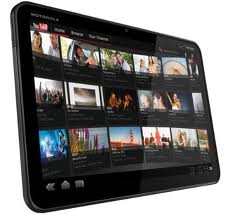 The debut of the Motorola Xoom was a pretty powerful demonstration that Google’s Android Honeycomb operating system is going to be a strong contender to the Apple iPad.  The experts at Cnet felt the same way as they crowned the Motorola Xoom as the the CES 2011 Best of Show in the tablet category.  Given that there was as many as 100 tablet devices introduced at this year’s CES, that is a very nice stamp of approval.

Other tablets that were nominated for the award include the Blackberry Palybook, the Samsung Sliding PC, and Toshiba’s 10″ Android Tablet.  Its pretty much a given that any tablet that shows its touchscreen at the CES will instantly be evaluated on how well it can measure up to the iPad.  Each of these Best of Show nominees did a good job of holding their own, with the Xoom standing out as the most impressive.

Google’s Android Honeycomb OS was certainly dressed to impress as it demonstrated its prowess in multi-tasking with a high quality performance than the competition.  Judges also favored the Xoom’s 10″ high resolution touch screen, 1GHz Tegra 2 dual core processor, dual facing cameras, 4G compatibility, HD video recording, Flash support, and HDMIout.  The Xoom was a savvy example of what we can expect from the Honeycomb platform, which was developed explicitly for tablets.

The initial release of the Motorola Xoom tablet is expected to occur during the first quarter of 2011, and will feature 3G connectivity that can be upgraded to 4G during the second quarter of the year.  Xoom tablets released later will automatically include 4G. The one tid-bit that is not yet known is the price, which will be a determining factor that weighs in on the Xoom’s strength against the iPad.