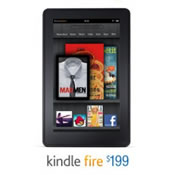 Amazon has unveiled the Kindle Fire tablet, their new 7″ full color Android tablet that features a dual core processor, Amazon Silk cloud accelerated web browsing, IPS technology for a stunning display, advanced multimedia functionality, and much more.  Analysts are expecting the Amazon tablet to be the iPad’s biggest competition this holiday season with its reasonable price tag and exceptional performance.  This brand new Amazon Android Tablet is available for pre-order for only $199!!  Learn more about this new Amazon Kindle Fire tablet.

Stay tuned for a full review to be posted within in the week once we’ve gotten to spend a little time with this savvy new gadget.

Speculation is heating up the blogsphere regarding Amazon’s entrance into the tablet market, with everyone trying to predict what Amazon will serve up with their first Amazon Android Tablet.  Rumors, guesses, and predictions abound, with consumers having high hopes that like the Kindle’s pressence in the ereader niche, that this new Amazon Android Tablet will turn out to be the hottest thing since sliced bread at the most affordable price.

Many industry watchers are predicting that the Amazon Tablet will be an iPad killer, while others scoff at the idea that Amazon could come up with a tablet comparable to the iPad at some magical rock bottom price.  While we all know Where To Purchase Amazon Tablet devices, what we’re anxious to find out is when!!

While there isn’t much solid information floating around out there other than strong opinions and intriguing theories, we decided to at least explore a few of them before advising you to stay tuned for more information.  Since first receiving the ‘stay tuned’ advisement from Jeff Bezos, Amazon founder, when asked if Amazon was developing their own tablet, the rumor mill cranked into high gear, and so did theories regarding what the device may turn out to be.  One of the compelling speculations regarding an Amazon Android Tablet release includes a multimedia, entertainment focused device that was further solidified as Amazon secured a deal with CBS for direct streaming of their content.

The entertainment tablet theory dubbed the device as the Hollywood Tablet, a term that caught on and has been used to refer to this potential tablet pc.  The idea is that it will be a ‘Kindle for Movies’, providing the same type of platform for instantly streamed and downloadable movies that the Kindle provided for eBooks.  Some have also called it the Kindle Tablet.

With the popularity of movie streaming, and physical DVD’s being used less and less, it would be perfect timing for such a move.  Netflix is the pioneer in this concept, but its instant streaming program offers limited selection and often poor picture quality, thereby providing a window of opportunity for Amazon to slip into this niche with a formidable device.

Amazon certainly has the tools in place to support such an endeavor with the recently launched Amazon App Store, Cloud Player and Cloud Storage functionality, and could certainly springboard off of these tools from just about any Movie Marketplace to an effective movie centered tablet.  Amazon also has their own movie streaming service which they could optimize to come pre-loaded on their new Hollywood Tablet.

Rumor has it that tablet maker Quanta has already received hefty orders from Amazon, and depending on their projected release date, which has been reported to e anywhere from this summer to the holiday shopping season, it is possible that the Amazon Android Tablet will ship out with the Android 4.0 Ice Cream Sandwich operating system on board. It is also expected that the Amazon Hollywood Tablet will feature the Quad Core Tegra 3 processor which is both super fast, and energy saving.

A second tablet has been dubbed the Coyote, and there have been rumors that Amazon plans to release their outsourced tablet during 2011 sometime, but are also working on manufacturing their own second tablet that will not be ready until sometime in 2012.  While all of this information has been gleamed from various reliable technology sources, a huge portion of it all is speculation.

An Amazon Hollywood Tablet that behaves like a Kindle for Movies is not far fetched at all, especially considering Amazon’s deal with CBS, but once again, nobody knows for sure.  As soon as the information is available, we will bring you everything we know about Where to Purchase Amazon Android Tablet, including authorized retailers that will carrying the device other than Amazon.

Please stay tuned, we will update this page as information is released.  Be sure to follow us on Twitter to get instant notifications as soon as we learn more!  To find out more about Android tablets that are already out on the market, including the Samsung Galaxy Tab, BlackBerry PlayBook, Motorola Xoom, and all the latest releases, check out the Amazon Tablet Store.